Zen-chan (ぜんちゃん, Zen-chan?), also known as Bubble Buster or Benzo, is a recurring enemy in the Bubble Bobble series. Zen-chans are one of the most common enemies present throughout the series, and feature in almost every Bubble Bobble game.

Zen-chans are cylindrical in shape, and resemble a small wind-up toy. A Zen-chan's body is separated into two parts, the top part being light gray, and the bottom part being a darker blue color. Zen-chans have a wind-up key attached to the side of their mouths, and the bottom section of their bodies sticks out compared to the top one, giving them a noticeable underbite. Zen-chans are typically shown with red feet, which are sometimes depicted in the shape of the feet of a typical wind-up toy.

Zen-chans do not possess many unique abilities, and most of their attacks involve simply jumping and charging at their opponent. In certain games, Zen-chans are able to shoot their spare mechanical parts as an attack. Additionally, the Zen-chans in Rainbow Islands are able to fire red pellets out of their mouths, an ability that has not been featured in any other games.

Zen-chans were originally planned to appear as enemies in Chack'n Pop alongside Maitas and Monstas, but did not make it into the final game. Although they were scrapped, their sprite data can still be found in the game's files.

Zen-chans make their proper debut in Bubble Bobble, appearing as one of the most common enemies in the game. They march back and forth across the stage, only stopping to jump up to a higher platform if the player is above them.

Two giant Zen-chans appear on Round 17, carrying Betty and Patty to the bottom floor of the Cave of Monsters.

Zen-chans return in Rainbow Islands, appearing as enemies in the game's final world, Bubble Island. Like the other enemies in the level, they appear in a perpetually angered state, and now have the ability to shoot red pellets at the player.

Zen-chans appear in Parasol Stars in the eighth world, Bubble Star, behaving similarly to their appearance in Bubble Bobble. They are joined by a new variant known as Robo-Zen, a large Zen-chan with mechanical legs.

Zen-chans appear yet again in Bubble Bobble Part 2 as a common enemy. The game's first boss, Springit, is a large capsule-shaped Zen-chan with arms. After being damaged enough, Springit's top is destroyed, revealing him to be piloted by an ordinary Zen-chan, who can be defeated like any other enemy. Robo-Zens also make a reappearance, gaining the ability to fire missiles at the player.

In the North American manual for Bubble Bobble Part 2, Zen-chans are known as Hoppit.

Zen-chans appear once again in Bubble Bobble Junior as the most common enemy encountered in the game. The first boss of the game is a large propellored Zen-chan known as Helio.

Zen-chans are once again referred to as Hoppit in the English manual for Bubble Bobble Junior.

Zen-chans appear once again in Bubble Symphony. Unlike previous games in the series, their bottom half is now colored purple. A variant of Zen-chan clad in knight armor known as Kabu-chan is introduced as well.

A Zen-chan appears in the console version of Bust-A-Move as the first opponent in the game's Player vs. Computer mode. They also make an appearance outside of this mode in all versions of the game, being trapped inside the blue bubbles featured in normal gameplay.

Zen-chans and their giant variants appear as common enemies in Bubble Memories. The giant Zen-chans are unable to be trapped in regular bubbles, and can only be defeated by way of a Special Bubble or being trapped in a Giant Bubble. Two giant Zen-chans appear before Round 5, carrying the Red Potion up the floors of the Rainbow Tower.

Zen-chans have a small cameo in Bust-A-Move 3, appearing in the introductory cutscenes to Bub and Debblun's stages. In this appearance, they reuse their sprites from Bubble Bobble.

Zen-chans appear in Classic Bubble Bobble, acting and looking nearly identical to their portrayal in Bubble Bobble Junior. A giant Zen-chan named Pear appears as the boss of the Clock Area.

A Zen-chan is a playable character in Bust-A-Move Millennium, and is one of the few characters that Bub does not fight in Story Mode.

Zen-chans once again appear in Bubble Bobble: Old & New, receiving a slight redesign. In this appearance, they look more robotic and have a more oblong shape.

A Zen-chan is a playable character in Puzzle Bobble DS, along with several other enemies from Bubble Bobble.

Zen-chans once again appear as common enemies in Bubble Bobble Revolution. The first boss of the game is a Zen-chan-shaped mech piloted by three of the enemies. A new variant of Zen-chan also appears in the game.

Zen-chans have a minor role in Bust-A-Move DS, appearing on the bottom screen, holding a Star Bubble in reserve for the player. A Zen-chan also appears on the title screen, sleeping inside of a bubble.

A Zen-chan appears in Bust-A-Move Deluxe, working the Bubble Launcher in place of the player's character, who is now stationed at the side of the screen.

Zen-chans appear common enemies in Bubble Bobble Double Shot. A giant Zen-chan serves as the first boss, and spits out smaller Zen-chans and screws to attack.

A giant Zen-chan appears as the boss of Metal Meteor in Space Bust-A-Move. It summons three smaller, metallic Zen-chans to push the bubbles downwards towards the boundary line. After clearing these bubbles, the Zen-chan will be stunned, and its mouth with open to reveal more bubbles the player needs to clear. Clearing these bubbles will defeat the Zen-chan, who explodes, revealing a soot-covered Drunk piloting it from the inside.

Zen-chans appear in Bubble Bobble Plus!, behaving identically to their initial appearance in the original Bubble Bobble.

A Zen-chan is the first opponent fought in the Player vs. Computer of Bust-A-Move Plus!.

Zen-chans are once again common enemies in Bubble Bobble Double, being able to be defeated by tapping on the screen to trap them in a bubble. In this appearance, they reuse their sprites from the original Bubble Bobble. The first boss of the game is a robotic Zen-chan known as the Mechanic Zen-chan.

A Zen-chan is the first boss in Bust-A-Move Universe, guarding a blue Bubble Dragon on the Motherland level. It can be defeated by shooting Bomb Bubbles at the bubble that it surrounds itself with.

A giant Zen-chan is the first boss encountered by the player in Pop'n Pop, firing gears down at the player's helper in order to hinder them.

Maitas appear as targets in the Bubble Bobble-themed Whac-A-Mole-styled arcade game, Bubblun Attack. They use their design from Bust-A-Move Islands in this appearance, and pop out of the front three holes of the machine.

Zen-chans appear as obstacles in Bub's Puzzle Blast, swallowing bubbles every time the player makes a move. Popping a Special Bubble next to a Zen-chan can stun it momentarily. They use their appearance from Bust-A-Move Islands in this appearance.

They are referred to as Bubble Buster in the English release of the game, a name that was used in early localized material for the Bubble Bobble series.

The name "Zen-chan" comes from the Japanese word zenmai (ぜんまい, zenmai?), meaning "spring". The Japanese term zenmai jikake (ぜんまいけ, zenmai jikake?) translates to clockwork, and is likely the inspiration of the name, given the enemy's resemblance to a wind-up toy. The second part of the name comes from the Japanese honorific -chan (ちゃん, -chan?), which is usually used to indicate the speaker finds the person they are talking about endearing. 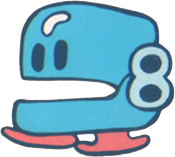 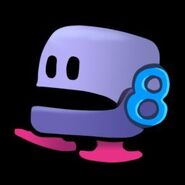 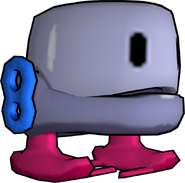