Grumple Grommit
Baron von Bonner
Super Drunk (すーぱーどらんく, Sūpā Doranku?), also known as Grumple Grommit, is a recurring antagonist in the Bubble Bobble series, first appearing as the final boss of Bubble Bobble. He is a giant Drunk who lives on the 100th floor of the Cave of Monsters, and is the one responsible for kidnapping Betty and Patty, as well as transforming Bub and Bob into Bubble Dragons.

Super Drunk is an enormous Drunk, clad in a green robe and wielding a large yellow cane. He has rosy cheeks, and wears red boots, similar to most members of his species.

Super Drunk's personality has not been established in-depth, but the tone of the messages he has written in the Secret Rooms in Bubble Bobble seem to show that he has an honorable disposition towards his opponents, going so far as to give Bub and Bob tips on how to defeat him. Additionally, in the Arrange mode in Bubble Bobble Plus!, he is presented as a (likely temporary) ally of the main characters. Despite this, he is still generally depicted as villainous in nature.

Bubble Symphony shows a more vengeful side of Super Drunk, with him swearing revenge on Bub, Bob, Peb, and Pab for his defeat in the original Bubble Bobble, working with Hyper Drunk to trap the four in the Storybook World.

Super Drunk's main form of attack is throwing bottles at his opponents, being able to hurl out a large wave of them in the original Bubble Bobble. In Bubble Symphony, he is able to charge into the player, rushing towards them at high speed and ramming into them.

Aside from physical techniques, Super Drunk is said to wield magical powers, having obtained these abilities from fairies as a gift. One of his magical abilities involves transforming humans into Bubble Dragons. Despite all of his strength, Super Drunk has a massive weakness to lightning, causing him to seal away the Drug of Thunder in a secret room in the Cave of Monsters.

As the final boss of the game, Super Drunk is fought at Round 100. Super Drunk will move around the room in a diagonal pattern, changing direction upon hitting a wall and stopping intermittently to hurl out waves of whiskey bottles that damage the player if they make contact. As Super Drunk is impervious to Bub and Bob's normal bubbles, the player must use the Drug of Thunder to defeat him, and produce and burst enough Thunder Bubbles to drain his health. After being hit enough times, Super Drunk becomes trapped inside a massive bubble, which the player must burst in order to defeat him and rescue the kidnapped girls.

If the player manages to earn the true ending of the game, after Super Drunk's defeat, it is revealed that Bub and Bob's parents, Mama and Papa, were also being kept in the basement of the Cave of Monsters, having been controlled by a mysterious figure.

While Super Drunk himself does not make an appearance, the Game Boy version of Bubble Bobble features a character known as Super Drunk Jr., who is responsible for stealing the Moon Water and sealing away the four spirits that protect it. Super Drunk Jr. appears nearly identical to Super Drunk, though any relation between the two is unknown.

Super Drunk returns in Parasol Stars, as the boss of Bubble Star, the game's Bubble Bobble-themed world. Super Drunk behaves similar to how he does in Bubble Bobble, moving around the level and throwing a wave of bottles out at the player. The player can attack him by building up a Thunder Bubble on their parasol, mirroring his weakness from the original game.

A robotic duplicate of Super Drunk appears as the penultimate boss in Bubble Bobble Part 2. It is fought on Round 79 in the Castle of Fire, the game's final world. The robotic Super Drunk behaves nearly identically to the real Super Drunk, but fires energy balls instead of throwing bottles. Upon being defeated, the robot explodes into numerous mechanical parts.

Super Drunk serves as the main antagonist and final boss in the console version of Bust-A-Move. He is the mastermind behind the theft of the Book of Puzzle, having stolen it from Rainbow Village and using its powers to surround monsters with mysterious bubbles, sending them to attack the village.

Super Drunk appears once again in Bubble Symphony. He aids Hyper Drunk in transforming Bub, Bob, Peb, and Pab into Bubble Dragons, trapping them inside the Storybook World.

Super Drunk acts as the game's first boss, appearing in either Fairy Land, Dessert Land, or Toy Land, depending on which door the player enters after the first round. He now features several patches on his cloak, and possesses a new attack; growing angry and charging at the player rapidly after taking enough damage.

A puppet version of Super Drunk appears on the last level, being controlled by Hyper Drunk.

Super Drunk appears as the final boss in classic mode of Bubble Bobble Plus!, but is also referenced in the game's Arrange mode. In the Secret Rooms encountered in that mode, it is revealed Super Drunk obtained his magical powers from fairies, and that his heart is being used by the Dark Dragon to power himself. The game also reveals Super Drunk to be at least 1,000 years old.

Super Drunk is the main antagonist of New Bust-A-Move, as he is revealed to be the one who summoned the shadow creatures to the Rainbow Islands. Super Drunk is not fought directly, but he is shown before the Skeleton boss battle.

In the English version of the game, he is referred to as Grumple Grommit, a name origination from the English manual of the NES version of Bubble Bobble.

Super Drunk appears as a boss in the South Korea-exclusive mobile game Bubble Bobble for Kakao, and was added as part of the game's "Season 2" update. He acts as the main antagonist of the game, kidnapping the Bubble Princess. 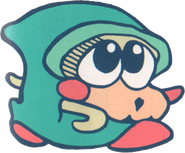 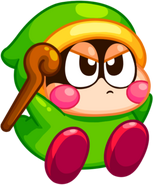