The Super Dark Great Dragon is a large green Bubble Dragon with yellow spines. He has large red wings, and is clad in ornately decorated armor. The Dragon's claws are much longer and sharper than those possessed by most Bubble Dragons, and he has two visible fangs as opposed to the one visible tooth usually seen on the species. The spaulders and chestplate of the Dragon's armor are decorated with green jewels, and he has a noticeably longer tail than most other Bubble Dragons.

After being defeated, the Dragon's head separates from his torso, revealing that most of his body is mechanical beneath the armor.

The Super Dark Great Dragon possesses vast magical power, along with a variety of formidable physical abilities. He is able to transform humans into Bubble Dragons at a rather large scale, shown by his ability to transform the entire population of Rainbow Island at once. The Dragon has been shown to be able to fly, as well as fire energy balls to attack his foes. In Pop'n Pop, he is able to utilize the powers of all three of the main Special Bubbles appearing in the Bubble Bobble series; Thunder, Water, and Fire.

The Super Great Dark Dragon first appears in Bubble Memories, transforming the population of Rainbow Island into Bubble Dragons via bolts of magical lightning before stealing the Rainbow Potion, a magical medicine able to change those cursed back to their human forms. The Dragon splits the potion into seven individual potions before flying to of the Rainbow Tower and scattering the potions throughout the tower's floors. The Dragon confronts Bub and Bob upon their entrance to the tower, appearing in silhouette form and laughing evilly before flying up to the top floor. Bub and Bob recognize the Dragon as the Boss of Shadow, who they had previously defeated in Rainbow Islands.

After Bub and Bob finally manage to strike the Dragon down, he steals the Rainbow Potions, then uses his magic to raise the Tower of Darkness from the bottom of the sea. He leaves behind a letter, telling Bub and Bob that they have shown their mettle well, and grants them the opportunity to have a duel in the Tower of Darkness, stating that he will take their Rainbow Potions for good if they lose.

The Super Dark Great Dragon acts as the game's final boss, appearing on the 80th floor of the Rainbow Tower. The player is given a Drug of Thunder to defeat him with. The Dragon is fought again in the game's Super Mode, with the player having been given a Drug of Melody to defeat him with instead. After he takes enough damage, the Dragon sheds his torso and transforms into the Super Mecha Skel-Monsta, his final form.

After the duo defeat the Super Mecha Skel-Monsta, they turn the villagers back using the combined Rainbow Potion, before gliding down the tower with their Magic Parasols and reuniting with their parents, defeating the Master of Darkness for good.

The Super Dark Great Dragon appears as the main antagonist of Pop'n Pop, staging an attack on Pop'n World, causing the princess of Pop'n World, Princess Lena, to call for the help of numerous Taito characters. In Bub and Bob's intro, they state that they had defeated the Dragon before, but she informs them that before his demise, he managed to escape.

The Dragon acts as the game's final boss, utilizing his standard energy ball attack as well as several new attacks incorporating lightning, fire, and water. After being damaged enough, he once against transforms into the Super Mecha Skel-Monsta.

The Super Dark Great Dragon appears as a boss in the South Korea-exclusive mobile game Bubble Bobble for Kakao. He is now colored a light bluish-green, and has yellow wings instead of red ones. In-game, he is simply referred to as the Great Dragon.

The Super Dark Great Dragon's name originates from a literal English translation of his title, which comes from his original appearance in Rainbow Islands. The name Ankokudaimaō (, Ankokudaimaō?), when broken down, literally translates to "Dark Great Demon King", hence the "Dark Great" in his name. 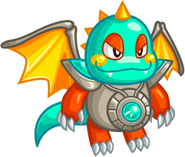