Skel-Monsta (すかるもんすた, Sukaru Monsuta?), also known as Baron von Blubba, is a recurring enemy in the Bubble Bobble series. Skel-Monsta typically appears when the player takes too long to complete a level, showing up a few seconds after the "Hurry Up!" alert text appears. It is typically invincible, and will only stop attacking the player if they either complete the level or lose a life.

The Skel-Monsta is a skeletal Monsta with pronounced teeth and red eyes. Certain games give its body a rough bony texture, with cracks on its upper head.

Skel-Monsta possesses several ghostly abilities, including teleportation and moving through walls. It is also impervious to Bub and Bob's bubbles in most games, not being able to be defeated by conventional means.

Skel-Monsta first appears in Bubble Bobble as an invincible enemy, appearing when the player takes too long to complete the level or touches the Gold Skull. It cannot be defeated through conventional means, and the player either has to lose a life or clear the level before he disappears.

The English manual refers to the Skel-Monsta as Baron von Blubba, and in the introductory comic, "Baron von Blubba" is listed as the one who kidnapped Bub and Bob's girlfriends, Betty and Patty, instead of Super Drunk.

Skel-Monstas make a minor appearance in Rainbow Islands, appearing as projectiles being shot out by Monstas in the game's final world, Bubble Island. The game's main antagonist and final boss, the Boss of Dark Shadow, is also revealed to be a giant Skel-Monsta known as the Super Skel-Monsta.

Skel-Monsta does not appear in Parasol Stars, but an enemy known as Death (死神, Shinigami?, "Death God") appears in its place, acting as the time limit enforcer.

In Bubble Bobble Part 2, "Death" is revealed to be one of the Skull Brothers, the main antagonists of the game who appear as hooded Skel-Monstas. An unused ending text crawl for Rainbow Islands reveals the Skull Brothers to have come from the pieces of the Super Skel-Monsta's soul, which escaped after the being's demise.

Skel-Monsta returns as an enemy in Bubble Bobble Part 2, acting identically to its first appearance in Bubble Bobble. The Skull Brothers make their proper debut in this game, and now resemble hooded Skel-Monstas.

In the North American manual for Bubble Bobble Part 2, the Skel-Monsta is referred to as Sawbones.

In Bubble Bobble Junior, Skel-Monsta appears once again, acting identically to its appearances in the previous Bubble Bobble games by chasing down the player if they take too long to finish a level.

The game's main antagonist and final boss, the demon king Great Skel, is a large, robed Skel-Monsta with limbs.

Skel-Monsta appears again as an invincible enemy in Bubble Symphony, chasing the four protagonists down if they take too long to complete a level. Two Skel-Monstas appear at the beginning of most worlds in the game, holding one of the four keys the player needs to unlock the game's final world, Last Road.

Skel-Monsta appears only in the console version of Bust-A-Move, acting as the tenth and final opponent in the game's Vs. Mode.

Skel-Monsta appears in Bubble Memories as an invincible enemy, mirroring its role in most of its previous appearances. The game's final boss, the Super Dark Great Dragon, transforms into a mechanical Skel-Monsta known as the Mechanical Monsta.

Skel-Monsta appears once again as an invincible enemy in Classic Bubble Bobble, behaving identically to its previous appearances.

Skel-Monsta appears yet again in Bubble Bobble Old & New, and receives a redesign in the game's "New" mode. It now resembles a whale much more closely than before, and appears more skeletal than ghostly.

Skel-Monsta is an unlockable character in Puzzle Bobble DS. It lacks any skeletal features in this title, simply appearing as a white recolor of Monsta. It is unlocked by clearing all levels in Classic Mode.

Skel-Monstas appear as a regular enemy in the last two worlds of Bubble Bobble Revolution. Unlike the other games in the series, they can be trapped in a bubble and defeated like other enemies.

While Skel-Monstas do not appear in the game themselves, lanterns shaped like them appear on the sides of the screen during gameplay.

Skel-Monsta appears in Rainbow Islands Revolution, acting as an invincible enemy that appears when the timer runs out like its previous appearances in the Bubble Bobble series, replacing the rising water from the original Rainbow Islands.

Skel-Monsta appears in Bubble Bobble 4 Friends' DLC campaign, Bubble Bobble 4 Friends: The Baron is Back!. In the English version of the game, it is referred to by its previous English name of "Baron von Blubba". The Skel-Monsta serves the same role it did in the original game, appearing if the player takes too long to complete a level. In this appearance, it uses a version of its sprite from the original Bubble Bobble, albeit increased in size to match the rest of the game's models.

A giant Skel-Monsta, resembling the original sprite made out of blocks, serves as the final boss of The Baron is Back!. The boss is referred to as Boss von Blubba in the English version of the game, and Boss Skel (ボス すかる, Bosu Sukaru?) in the Japanese version.

A Skel-Monsta appears as Drunk's helper in Pop'n Pop. The Mechanical Monsta from Bubble Memories, along with the Super Great Dark Dragon, also appears as the final boss.

Skel-Monsta's name comes from the English word "skeleton", and the name of the enemy upon which it is based. However, in Japanese, the initial part of its name is pronounced identically to the Japanese rendering of the word "skull", sukaru (スカル, sukaru?), as "skel" would be sukeru (スケル, sukeru?). This has been reflected in some media, with the enemy's name being written as "Skull Monsta" instead of "Skel-Monsta". 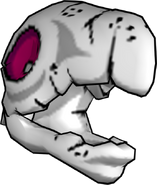