Bubble Bobble Wiki
Register
Don't have an account?
Sign In
Advertisement
in: Playable characters, Humans, Characters from other Taito games

Sayo-chan (ちゃん, Sayo-chan?) is the main character of Taito's KiKi KaiKai series of games, first appearing in the arcade title KiKi KaiKai. She is a shrine maiden who serves the Seven Gods of Fortune, and has made numerous cameo appearances in the Bubble Bobble series.

Sayo-chan is a young shrine maiden with long black hair. She wears a red hakama with a white haori, both of which are traditionally worn by miko. Her hair is tied at the bottom, and she wears red sandals with white socks. Sayo is traditionally seen wielding a gohei, a wooden wand typically used by shrine maidens in Shinto rituals.

Sayo-chan is very dedicated to her duty as a shrine maiden, and is always willing to help people in need. In various games in the KiKi KaiKai series, she sets out to restore order and stop the rampaging yōkai, facing down any threats that may come her way. Though she is a shrine maiden and has defeated rampaging yōkai on multiple occasions, she is still friendly towards them when they are not causing trouble, and has teamed up with the yōkai Manuke on multiple occasions in order to defeat a greater threat.

Sayo-chan has two main forms of attack; waving her gohei, known as the Oharai-bo (おはらい棒, Oharai-bō?, "Purification Rod") to strike foes, or throwing ofuda talismans to banish them. She is able to banish and chase away evil spirits and yōkai with these abilities. One technique, the Oharai Spin (おはらいスピン, Oharai Supin?) has Sayo-chan spin around while holding out her gohei, striking any foes she makes contact with.

Aside from these, Sayo-chan is able to utilize a variety of spiritual techniques thanks to her training as a shrine maiden. One powerful technique she possesses is known as Bomber (ボンバー, Bonbā?), an attack where Sayo-chan unleashes a blast of energy that moves outwards in waves, defeating anything in its path.

Sayo-chan first appeared as the main character of KiKi KaiKai. In the opening to the game, she is shown fanning a ceremonial fire before the Seven Gods of Fortune (七福神, Shichifukujin?), who are suddenly kidnapped by yōkai. Sayo-chan sets out to rescue the Gods, eventually defeating the yōkai and putting an end to their mischief.

In the game's sequels, KiKi KaiKai: Nazo no Kuro Manto and KiKi KaiKai: Tsukiyo Sōshi, she teams up with the yōkai Manuke, who had previously been part of the group that kidnapped the Seven Gods of Fortune, to stop greater threats, like the evil beings known as the Black Mantle and Ōtomo no Dainagon. In KiKi KaiKai Advance, Sayo-chan and Manuke are joined by Sayo-chan's fellow shrine maiden, Miki-chan, who originally appeared as the second player character in KiKi KaiKai: Dotou Hen, an expanded version of KiKi KaiKai released for the Famicom Disk System. The three set out to defeat the evil Yamato no Orochi, who escaped after being sealed and began to wreak havoc on the world.

Sayo-chan first appears in the Bubble Bobble series in the NES version of Rainbow Islands, appearing in a cutscene on the game's KiKi KaiKai-themed world, KiKi KaiKai Island. She flirts with Bubby, asking him out on a date, but Bobby overhears this, and teasingly threatens to tell Betty. Bubby insists that the situation isn't what Bobby thinks, and Sayo-chan realizes he already has a girlfriend, but gives the duo a hint about the Diamond Rod. Manuke appears as the boss of KiKi KaiKai Island, and is fought after transforming into a large version of Sayo-chan.

In the North American release of the NES port of Rainbow Islands, Sayo-chan is referred to as Cindy.

Sayo-chan appears as an assist character in Bubble Symphony. She can be summoned by picking up her gohei, which will randomly spawn as an item. Sayo-chan helps the player by throwing ofuda at the enemies, which will defeat them on contact. Manuke also appears as a boss, taking the form of Sayo-chan once again.

Sayo-chan makes a small cameo in Bust-A-Move 2, appearing on the ending screen of the game's Player vs. Computer mode.

Sayo-chan appears as an item in Bubble Memories, appearing on Round 59, as well as in the game's Super Mode on Round 25. The item based off of her spawns from the remaining bubbles in the level after defeating all of the enemies.

Sayo-chan makes a minor cameo in Space Bust-A-Move, with the red bubbles being replaced by an image of her face in the KiKi KaiKai-themed bubble set purchasable from the game's shop.

Sayo-chan appears as a playable character in Pop'n Pop, alongside Miki-chan, who features as the second player character in place of her. Their helper is a Puka Puka. Manuke also appears as a boss in the game, once again taking the form of Sayo-chan during his boss battle.

Sayo-chan appears as a playable character in the mobile game Bubblen Golf.

Sayo-chan appears as a co-pilot for the Vaus in the Taito crossover game Arkanoid vs. Space Invaders. 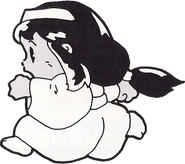 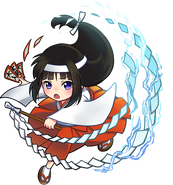