Rubblen
Rascal of Hiyoshi Mountain
Rascal (らすかる, Rasukaru?), also known as Rubblen, is a recurring enemy in the Bubble Bobble series. Rascals appear exclusively in Secret Rooms, acting in a similar manner to a Skel-Monsta, appearing if the player takes too much time to gather all the items and exit the room. Much like Skel-Monstas, they are invincible, only disappearing if the player exits the room or loses a life by touching them.

Rascals are green bean-shaped creatures usually seen with a wide grin on their face. They have two visible teeth, and have small spots all over their body.

Rascals behave identically to Skel-Monstas, being able to move through walls and are unable to be trapped in bubbles. Much like other enemies, if the player touches them, they will lose a life.

Rascals first appear in Bubble Bobble, showing up only in Secret Rooms. They appear if the player stays in the Secret Room for too long, and follow them around until they either exit the room or lose a life.

Rascals appear again in Bubble Symphony. They serve the same role as in Bubble Bobble, appearing in the game's Secret Rooms if the player takes too long to complete them.

A Rascal is the ninth opponent faced in the Vs. Mode of the SNES version of Bust-A-Move.

Rascals appear once again in Bubble Memories, serving the same role as their previous appearances, only appearing in Secret Rooms. Unlike most depictions, Rascals in this game are transparent.

Rascals appear as enemies in the Secret Rooms in Bubble Bobble: Old & New, mirroring their appearance from the original Bubble Bobble. In the game's "New" mode, they have angry faces and have cloud-shaped bodies.

Rascals appear in Bubble Bobble Double Shot under different circumstances than before, as the game features no Secret Rooms. If the player takes too long to defeat a boss, a Rascal appears to hunt the player down. A giant Rascal appears in one of the continue minigames, chasing Bub through a prison-like area. The player must tap alternating sides of the Nintendo DS touch screen to move Bub and outrun the Rascal.

Rascals appear as enemies Secret Rooms once again in Bubble Bobble Plus!, behaving identically to their original appearance in Bubble Bobble. The boss of the game's DLC Expert Mode 2 is a giant Rascal with arms and legs named Madame Rascal.

"Rascal" is an English word referring to a mischievous person or troublemaker.

Rascal's name may also partially be a reference to the enemy's shared behavior with Skel-Monsta, as the characters sukaru (すかる, sukaru?) at the end of "Rascal" are shared with the first characters in "Skel-Monsta". 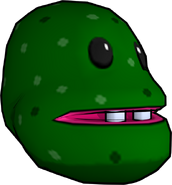