Hullaballoon
Boa-Boa
Nimbus
Purupuru
Pulpul (ぷるぷる, Purupuru?), also known as Hullaballoon or Boa-Boa, is a recurring enemy in the Bubble Bobble series. First appearing in the original Bubble Bobble, Pulpuls have appeared in nearly every subsequent mainline Bubble Bobble game since, as well as occasionally being featured as a playable character in the Bust-A-Move series.

Pulpuls are peach-colored creatures with four limbs, each with a round yellow appendage at the end. They have a purple propeller affixed atop their heads, which they use to fly.

Pulpuls use the propeller atop their head to fly, taking advantage of their aerial positioning to attack foes. The Pulpuls appearing in the Rainbow Islands series are able to drop bombs, an ability yet to appear in the main Bubble Bobble series.

Pulpuls first appear as an enemy in Bubble Bobble, and attack by flying around the level. They share a similar pattern of attack as Belugas, albeit they are able to move a bit faster. On Round 32 of the game, two Giant Pulpuls appear at the beginning of the round, carrying Betty and Patty down to the bottom of the Cave of Monsters.

Pulpuls appear again in Parasol Stars, and are introduced in the game's last two worlds. They act identical to their appearance in Bubble Bobble,.

In the manual for Bubble Bobble Part 2, Pulpuls are referred to as Nimbus.

A Pulpul is the fourth opponent in the Vs. Mode of the console version of Bust-A-Move. They also appear in all versions of the game, trapped inside of yellow bubbles.

Pulpuls appear yet again in Bubble Memories. Giant Pulpuls also appear as common enemies, and can only be trapped using the Giant Bubble technique.

Pulpuls return in Classic Bubble Bobble. A giant Pulpul named Peach is the boss of the Sky Area.

A Pulpul is a playable character and opponent in Bust-A-Move Millennium. In the game's story mode, it is fought in Skull Cave.

A Pulpul is a playable character in Bust-A-Move Deluxe.

Pulpuls appear yet again in Bubble Bobble Double Shot. The third boss is a giant Pulpul who must be defeated by blowing into the Nintendo DS microphone to run the fan positioned below it. The fan pushes bubbles up at the Pulpul, which hurt it on contact.

Pulpuls appear in Bubble Bobble Plus!, behaving identically to their first appearance.

A Pulpul is the fourth opponent in Bust-A-Move Plus!.

A Pulpul is the second boss in Bust-A-Move Universe. It is fought on the Moonbase level, guarding a bright green Bubble Dragon. 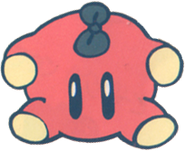 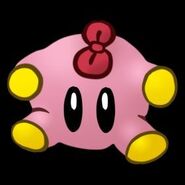 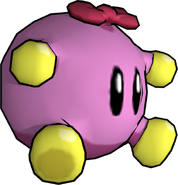