Coron
Patty (パティー, Patī?), also known as Coron (コロン, Koron?), is a character from the Bubble Bobble series, appearing as Bobby's girlfriend and the human form of Pab. She first appears in the original Bubble Bobble, being kidnapped by Super Drunk along with Betty. She is a playable character in Bubble Symphony both in human form and as Pab. 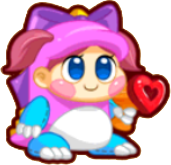