Parasol Stars (パラソルスター, Parasoru Sutā?) is a video game released by Taito in 1991 for the PC Engine. It is the sequel to Rainbow Islands, and the third game in the Bubble Bobble series. Unlike the previous installments, the game was never released on an arcade machine.

The Story of Parasol Stars[]

Once, long ago, there was a courageous warrior that entered a Cave of Monsters with the intent of sealing it forever. He accomplished this task, however, unknown to him, one monster escaped before the cave was sealed. Years passed, and that one monster eventually grew strong enough to break the power of the warrior's magic seal. That monster, who became known as Chaostikhan, unleashed the monsters within the cave on the world once again.

During this same period of time, Bubby and Bobby, our heroes, had won the admiration of the villagers of Rainbow Islands by defeating the enemies terrorizing their planet, allowing peace to settle in. To show their appreciation, the inhabitants of the Island entrusted one Magic Parasol each to Bubby and Bobby. In the months that followed, Bub and Bob were so intent on learning to harness the power of the Magic Parasols that they did not notice the menacing presence that was overtaking the neighboring planets. One day, they received an emergency distress signal from one of those nearby planets. Though they had not quite mastered the techniques for using the Magic Parasols, they courageously raised their parasols toward the planet in distress and disappeared into the skies above Rainbow Island, unaware of the danger and size of their new quest.

The Story So Far[]

After rescuing the inhabitants of Rainbow Islands in their last hair-raising adventure, Bub and Bob are enjoying a well earned vacation. However, their peace is shattered when the warmongering warrior Chaostikhan unleashes a magma of menacing monsters throughout the universe.

With their magic parasols in hand (gifts from the grateful Rainbow Islanders) Bub and Bob must defeat the monsters and free the universe.

Bub and Bob depart from Rainbow World to take on the monsters of seven wildly different planets:

Are there more worlds beyond these eight? Only you can find out, and only if you can unlock the secret of the Parasol Stars!!! If you get the Star Miracle, you can get a key which will let you into world 9.

Parasol Stars is filled with secrets. Here are just some of the puzzles to solve, and a few clues to help you along...

During the game, 4 different kinds of crests can appear - seemingly at random. These crests represent the power of Water, Fire, Lightning, and Stars. When three crests are collected, their power is unleashed in the form of a miracle!

Tip: When you create a large drop twice in the same round, the same kind of crest will appear on the next round!

Each planet contains a secret door. Where is it? What causes it to appear? What treasure does it protect?

A shimmering rainbow comet protects you, and a sparkling rainbow-colored necklace brings a true miracle beyond words!

Insert the Parasol Stars disk into the internal disk drive of your computer and switch it on. The game will then automatically load and run. The disk must be in the disk drive at all times whilst the game is running.

The volume of the music can be altered using the + and - keys on the keyboard. The sound effects will always play at the same volume, to change this alter the volume setting on your TV or monitor. To abort game press ESC whilst the game is paused.

Stop Movement with the Parasol![]

When you hit an enemy with the Parasol, changing it's color, the enemy is stunned and stops moving. Stunned enemies can be touched with no ill effects.

A stunned enemy will soon revive with a vengeance if left alone. It is therefore wise to dispose of enemies soon after they are stunned. Pick them up by pressing Button II and touching them with the open Parasol. Throw them by releasing Button II.

Line up enemies for big scores![]

Stun active enemies by throwing Drops or stunned enemies at them!

You can move drops or stunned enemies by rolling them - or ride them by jumping on them!

Use the Parasol to protect yourself from missiles and laser beams!

The 4 drop types are: Water, Lightning, Fire, and Star. If you retrieve the potion on the boss round, you can create and collect drops by simply holding your Parasol up!

Store drops by opening the Parasol. If you gather 5 drops at the same time, they transform into a large drop with awesome power!

Press and hold Button II (turbo switches off!) to keep the Parasol open!

You can climb by jumping up a stream of falling drops!

A large drop can be created 'on the fly' by throwing four drops at a cornered drop!

Hit Button II twice rapidly! The enemy will be stunned and disposed of quickly!

Jump on stunned enemies and raise the Parasol! The enemy below will be picked up, and you will shoot up!

When you throw an enemy or Drop, hidden food or valuable items will appear! Throw things repeatedly for mega-scores! If you are very lucky a 100 Dollar Coin will appear. Retrieve it and you will receive one extra credit!

Don't spend too much time searching for hidden bonus items without clearing a round. If you do, HURRY!! will appear on the screen and the enemies will move faster. After this, you will get only one more warning before Death arrives to try to take a life. Since Death cannot be defeated, the only way to escape is to finish the round. If Death successfully takes a life, he disappears for a while.

When Bub or Bob is playing he will have a status display at the top of the screen showing his name, how many lives he has left and his score.

If neither of them are playing then this space will be occupied with the message PRESS FIRE and the number of credits. If there are no credits left then GAME OVER will be displayed. If both Bub and Bob are playing then you will not be able to see how many credits you have until one player dies.

In the center of the status area is a blank space where the miracle icons will be displayed when you collect them.

Points are scored by collecting objects and by destroying the monsters.

To get points for destroying baddies you need to throw monsters against each other when they are paralyzed (green or blue). You get 2000 for the first monster you destroy this way, then 4000 then 8000, doubling all the time up to 100,000 if you destroy seven or more monsters with a single throw.

As the food you collect becomes more valuable then watch out for the 100 coin - it's only worth 100 points, but it gives you an extra credit!

To get past each level you have to clear it of all monsters before your time runs out. If it does run out the foul Gaiko will begin its relentless pursuit from which there is no escape!

How to Destroy the Monsters[]

To destroy the monsters you first have to paralyze them. This is done by hitting them with your parasol, or for the stronger monsters by throwing objects at them. When a monster is paralyzed then it will turn green (if Bub paralyzed it) or blue (if paralyzed by Bob).

When a monster is paralyzed you can destroy it, either by picking it up and throwing it against the wall, or by throwing something else at it.

How to use the Drips and Drops[]

There are four types of mega-drop:

How to keep your parasol up[]

How to collect objects[]

You can often find new objects by throwing something over the ground.

Some objects just give you points, some give you special powers such as:

There are four very special items - the Miracle icons. Every time you collect one of these it will appear at the top of the screen when you have collected three you will get a miracle. If you get three correctly then this will open doors for you!!! The most powerful miracle icon is the Parasol Stars!

Get three similar Miracle Icons and a door will appear at the end of the world after you beat the boss. Behind this door will be a special giant item. All of the monsters on the level where you caused the miracle will become 100,000 point giant point items!

Each planet has seven levels, on the last level of each world there is a special planetary guardian. This cannot be defeated by normal means. Bub and Bob must collect the power flagons to give them temporary special power. If you put your parasol up above your head (down+fire) then you will generate droplets on it which can be thrown at the guardian, or you can continue generating droplets to get a mega-drop.

These are found in the Boss Chambers of each world, and they are used to destroy said bosses. They come in the following types, with the following abilities: 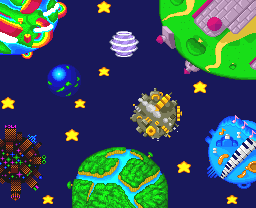