Nao Saito (Bubble Bobble 4 Friends)
Pab, known as Cororon (コロロン, Kororon?) in Japan, and alternatively known as Pabblun (パブルン, Paburun?) in the Japanese version of Bubble Bobble Plus!, is a recurring character in the Bubble Bobble series. She is Bob's girlfriend, and the Bubble Dragon form of Patty, and is often seen alongside her sister, Peb.

Pab is a pink Bubble Dragon that wears a bow. Her design varies between her various appearances.

In Bubble Symphony, Peb is pink in color and wears a purple bow. She has red spines, as well as blue arms and feet. Pab also has reddish-pink cheeks, and a white stomach area. Unlike Bub and Bob, she does not have a visible tooth in the upper middle part of her mouth.

In Bubble Bobble Plus!, Pab is now colored a lighter shade of pink, and wears a red bow on the side of her head, unlike in Bubble Symphony where her bow was worn on the top of her head. She now has noticeable eyelashes, and pink arms and feet, similar to Bub and Bob. Her cheeks and spines are also a darker shade of red, and she now has a visible tooth like most other Bubble Dragons.

Pab is described as acting like a big sister towards her friends, and being more outgoing than her sister, Peb. Despite this, she is said feel lonely at times. She is very close to her sister, and the two are often seen together.

Like most Bubble Dragons, Peb is able to shoot bubbles from her mouth. She can trap enemies inside her bubbles, and can pop them with her spines in order to defeat them. Pab can also jump on top of her bubbles to reach areas that are normally inaccessible to her. In Bubble Symphony, she is able to shoot bubbles much faster than the other playable characters, and is able to release three bubbles at once by charging up her bubbles, with two shooting out on either side of her and one shooting above her.

Although her human form, Patty, appeared in the original Bubble Bobble, Pab's dragon form appears in Bubble Symphony for the first time. She is referred to as Cororon in this game, and her human form is named Coron. She is able to shoot bubbles at a faster rate than the other playable characters, and she can release three bubbles at once, two to either side of her and one above her, by charging up her bubble-blowing ability.

In the in-game story of Bubble Symphony, Cororon is not the Bubble Dragon form of Patty, and she is instead stated to be one of the four children of Bub, Bob, Betty, and Patty from the original Bubble Bobble. However, the game's flyer ignores this, and just refers to Kululun and Cororon as Bub and Bob's good friends. Additionally, later games in the series refer to the female characters in Bubble Symphony as Bub and Bob's girlfriends.

Pab appears in Bust-A-Move Islands, alongside Peb. The two are encountered in Yippy Land. Pab was also added as a playable character in an update to the game, and can be obtained from the game's gacha feature.

Pab makes an appearance in Bubble Bobble 4 Friends, serving as the fourth player character in the game.

Pab appears in the 2011 South Korea-exclusive PC game Puzzle Bobble Online as a playable character. She uses her coloration from Bubble Symphony in this appearance.

Pab appears as a playable character in the South Korea-exclusive mobile game Bubble Bobble for Kakao. She reuses her appearance from Bust-A-Move Islands, and can be obtained from the game's gacha feature. The higher-rank versions of Pab give her red horn-rimmed glasses, a pearl necklace with a skull charm on it, a pink broomstick, and a witch's hat. Additionally, her human form appears as a playable character, and is once again referred to as Coron. In this appearance, she is shown wearing a suit based off of her Bubble Dragon form and uses a bubble gun to shoot bubbles. 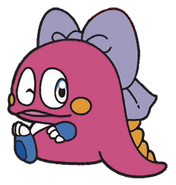 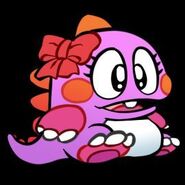 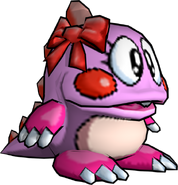