Monsta (もんすた, Monsuta?), also known as Beluga or Blubba, is a recurring enemy in the Bubble Bobble series. One of the most common enemies in the series, Monstas appear in nearly every single Bubble Bobble game, and have a recurring role as a playable character in the Bust-A-Move games.

Monstas resemble round purple whale-like creatures, sporting a small tail and two fins on either side of their body. They are generally depicted as having red eyes and wide mouths. Bubble Memories features a green variant of the Monsta with yellow eyes, but the two behave functionally identical to one another.

Monstas do not have many abilities outside of being able to fly. They generally cruise around the stage, changing trajectory upon bumping into walls. The Monstas appearing in Rainbow Islands are able to fire out a spread of six small Skel-Monstas at the player, an ability which has not returned in any other game since.

Monstas first appear in Chack'n Pop, first appearing in the opening cutscene, stealing the Hearts from Chack'n and Miss Chack'n. They are the most common enemies, attacking by flying around the level and attempting to hit the player. Monstas hatch from eggs that are hanging from the ceiling.

Monstas reappear in Bubble Bobble, behaving similarly to their appearance in Chack'n Pop. They fly around blindly, bouncing off of walls and attempting to hit the player. Two Giant Monstas appear on Round 64, carrying Betty and Patty to the bottom level of the Cave of Monsters.

An invincible skeletal Monsta known as Skel-Monsta also appears, showing up if the player takes too long to complete a level.

Monstas return as enemies in Rainbow Islands, appearing in the game's final world, Bubble Island. The Monstas encountered in this title have the ability to fire a spread of six projectiles shaped like small Skel-Monstas.

Monstas appear exclusively in the Underworld in Parasol Stars. They act identically to their appearance in Bubble Bobble, but appear significantly larger than other portrayals, and have yellow eyes instead of red ones.

Monstas reappear in Bubble Bobble Part 2, behaving identically to their appearance in Bubble Bobble. Later levels of the game feature Monstas with white sheets covering them known as Ghost Monstas. The sheets can be knocked off by a single bubble, turning the enemies back into regular Monstas. The Monstas in this game have yellow eyes, similar to their appearance in Parasol Stars.

In the North American manual for Bubble Bobble Part 2, Monstas are known as Slider.

Monstas appear yet again in Bubble Bobble Junior, acting and looking identically to their appearance in Bubble Bobble Part 2. The final boss of the game, Great Skel, has three Monstas circling around him at the beginning of the fight, who must be defeated before damaging him.

Monstas appear once again in Bubble Symphony, behaving similarly to many of their previous appearances. A large caped Monsta known as Super Monsta appears as the boss of the Water Fall and Japan-esqe levels.

A Monsta is the third opponent faced in the Vs. Mode in the SNES version of Bust-A-Move. They also appear during regular gameplay in all versions of the game, trapped inside of the purple bubbles.

A Monsta is the first opponent in the Vs. Mode of Bust-A-Move 2, fought on Chack'n Island. It appears in the opening cutscene of the game, stealing the stars from the night sky by order of Drunk.

Monstas reappear in Bubble Memories as common enemies. Monstas have two colorations in this game; their original purple color scheme, and a new green variant with yellow eyes that will chase after the player instead of flying around aimlessly like their purple counterparts. The game features two Monsta bosses, a radically redesigned Super Monsta who only appears in the game's practice mode, and a large Monsta in an inner tube known as Swimmer Queen Monsta, who is the seventh boss in the game's story mode. Two giant Monstas also appear on Round 25, carrying the Yellow Potion.

A Monsta is a secret character in the console version of Bust-A-Move 4, unlocked alongside Stoner, Woolen, Packy, Madame Luna, and Drunk.

Monstas appear once again in Classic Bubble Bobble. The boss of the Wood Area, Grape, is a giant crowned Monsta.

A Monsta appears as a playable character in Bust-A-Move Millennium, and is one of the few characters not encountered in Story Mode.

Monstas appear again in Bubble Bobble: Old & New, receiving a redesign along with the rest of the game's cast. They now resemble eels more than whales, and have green tongues.

A Monsta is a playable character in Puzzle Bobble Pocket, appearing alongside several other enemies from Bubble Bobble. The Monsta appearing in this game is colored white instead of purple, giving him a slight resemblance to a Skel-Monsta.

A Monsta is a playable character in Puzzle Bobble DS, alongside several other enemies from Bubble Bobble.

Monstas appear once again in Bubble Bobble Revolution. The second boss, the Monsta Mech, is a robotic Monsta piloted by three of the enemies.

Monstas appear on Bubble Island in Rainbow Islands Revolution, mirroring their appearance in the original Rainbow Islands, however, they no longer have the ability to fire out Skel-Monsta-shaped projectiles.

A Monsta is a playable character in Bust-A-Move Deluxe, and is one of the five characters that returned from Puzzle Bobble Pocket.

Monstas appear yet again in Bubble Bobble Double Shot. The fifth bosses of the game are three giant Monstas, each with different colored eyes. The Bubble Dragon that matches the color of the Monsta's eyes is the only one that can trap that Monsta in a bubble. The three bubbles must be simultaneously popped at once in order to defeat the bosses.

A Monsta is the third opponent in the Vs. Mode of Bust-A-Move Plus!.

A Monsta is the fourth boss of Bust-A-Move Universe, guarding a red Bubble Dragon in the Cloud Ocean level.

A Monsta appears in Pop'n Pop as Bub, Bob, Bubby, and Bobby's helper. In the Arcade version, the Monsta is green, but in the console version, it receives a new sprite and is colored purple like previous depictions.

A Monsta can become a copilot for the Vaus. His ability is to lengthen the Vaus 80% for 10 seconds.

Monsta's name comes from a corruption of the English word "monster". 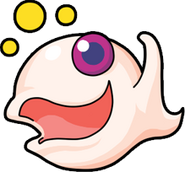 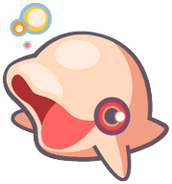 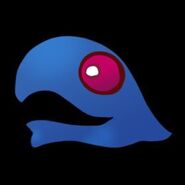 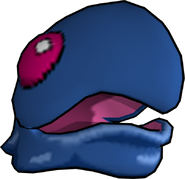 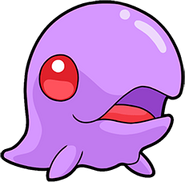 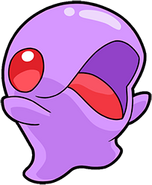