Bubble Bobble Wiki
Register
Don't have an account?
Sign In
Advertisement
in: Bosses, Characters from other Taito games

Rocky
Manuke (, Manuke?) is a major character from Taito's KiKi KaiKai series of games, and a recurring boss in the Bubble Bobble series. He is a shape-shifting tanuki yōkai who frequently appears disguised to look like Sayo-chan.

In his disguised form, Manuke appears nearly identical to Sayo-chan, sporting long black hair and clad in a traditional miko uniform, as well as carrying Sayo-chan's signature gohei. However, unlike Sayo-chan, he is usually depicted in this form as sporting tanuki ears and a tail. In the NES version of Rainbow Islands, he lacks the tanuki ears and tail, as he simply appears as a large version of Sayo-chan.

In his true form, Manuke resembles a usual depiction of a tanuki in Japanese mythology, sporting large ears and a bushy tail. Manuke's true form is depicted as having large testicles in the NES version of Rainbow Islands, a characteristic common to many depictions of tanuki in folklore, however, this has not appeared in any other games, likely due to sensitivity over depictions of genitalia.

In the KiKi KaiKai series, Manuke is generally depicted as being troublemaking and mischievous, as shown by his role in kidnapping the Seven Gods of Fortune along with the other yōkai. However, he is not truly malicious in nature, as he teams up with Sayo-chan in later installments of the series in order to stop a greater evil, and the two seem to have a friendly relationship. Despite this, he has largely played a more antagonistic role in the Bubble Bobble series, likely in order to reflect his role in the first KiKi KaiKai.

Manuke's signature technique is his transformation ability, which he largely uses to imitate Sayo-chan. Additionally, he also uses the technique to transform into a stone statue in order to attempt to crush the player. Manuke is also able to throw leaves at his opponents, a technique carried over from KiKi KaiKai: Nazo no Kuro Manto. In his true form, Manuke pounds his chest, sending out sound effects that say "pon" after the player.

Manuke is a tanuki who is part of a group of yōkai that kidnapped the Seven Lucky Gods, causing the shrine maiden Sayo-chan to set out to rescue the deities. She confronts several of the group's leaders, including Manuke, and eventually puts a stop to their mischief. Manuke serves as the last boss encountered in KiKi KaiKai, initially appearing as a tanuki-tailed version of Sayo-chan, and must be defeated before the player can proceed to the game's final stage. In the game's sequel, KiKi KaiKai: Nazo no Kuro Manto, Manuke teams up with Sayo-chan to help deal with the rest of his fellow yōkai, who have gone on a rampage due to the interference of the mysterious entity known as the Black Mantle. Manuke reappears as a playable character in both the third and fourth games in the series, KiKi KaiKai: Tsukiyo Sōshi and KiKi KaiKai Advance, once again helping Sayo-chan.

Manuke first appears in the Bubble Bobble series in the Nintendo Entertainment System version of Rainbow Islands, acting as the boss of the game's KiKi KaiKai-themed world, KiKi KaiKai Island. Initially, he appears as a large version of Sayo-chan, and attacks by throwing ofuda talismans at the player. In-game, he is referred to as Sayo-chan due to taking her form.

Manuke was renamed Cindy in the English version of the game, matching Sayo-chan's localized name.

Manuke appears in Bubble Symphony, working under Hyper Drunk in the Storybook World. He acts as the boss of game's KiKi KaiKai-themed world, which is simply known as KiKi KaiKai. His main form of attack is throwing leaves at the player, but he can also transform into a statue to try and crush the player, or pound his chest in his tanuki form, releasing damaging sound effects.

Manuke appears in Pop'n Pop alongside several other Taito antagonists. He once again appears disguised as Sayo-chan, and attacks by throwing ofuda talismans down at the player.

Manuke appears as a boss in the South Korean-exclusive mobile game Bubble Bobble for Kakao, and was added in the game's Season 2 update. Oddly, he now bears cat-like characteristics in his disguised form as opposed to tanuki ears and a tail, and holds dango on a stick instead of a gohei. In the trailer for the game's update, a variant of Manuke appears that has yet to be added to the game. This variant has rabbit ears, brown hair with two braids, is clad in a schoolgirl uniform, and is shown wielding a blue popsicle. 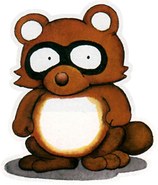 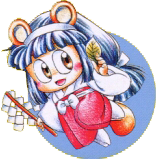 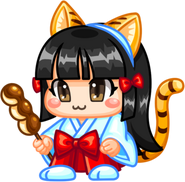