Maita (まいた, Maita?), also known as Stoner or Boris, is a recurring enemy in the Bubble Bobble series. They are a race of magicians clad in white robes who primarily attack by magically conjuring boulders. Maitas appear as an enemy in most Bubble Bobble games, and the species has a recurring role as a playable character in the Bust-A-Move series.

Maitas are small ghost-like creatures clad in white robes. They have prominent red eyes and blue feet, as well as faces covered in shadow from their hoods. It is stated that no one has even seen what they look like beneath their robes.

In Bust-A-Move Islands is shown wearing a yellow cape, a feature that is retained in their appearance in Bubblun Attack.

Maitas' main form of attack is conjuring and throwing boulders at their opponent via magical abilities. They have also been shown to be able to levitate briefly, as shown in some of their appearances in the Bust-A-Move series. Additionally, in Super Puzzle Bobble, the playable Maita is seen transforming to and from an owl.

Maitas make their first appearance in Chack'n Pop as an enemy that enforces the game's time limit. During each round, a Maita appears at the top of the stage, pushing a boulder towards the exit to the stage. If the player runs out of time, five more Maitas will appear, pushing the boulder into the exit and causing the player to lose a life. At the end of the game, seven Maitas are seen dancing during the wedding.

Maitas reappear as a common enemy in Bubble Bobble. They walk back and forth, pushing boulders at the player if they approach them. Two giant Maitas appear on Round 96, carrying Betty and Patty to the bottom of the Cave of Monsters.

Maitas reprise their role from the original Bubble Bobble in Final Bubble Bobble, an expanded port of the game released for the SEGA Master System. Additionally, a giant Maita known as Super Maita appears as a boss on Round 48.

Maitas reappear in Rainbow Islands as enemies in the game's final world, Bubble Island. They behave similarly to their appearance in Bubble Bobble, conjuring boulders to roll at the player.

Maitas make another appearance as a common enemy in the Game Boy version of Bubble Bobble, behaving identically to their appearance in the original game once again. The second boss of the game is a giant Maita known as Jam, who is encountered on Round 50.

Maitas return in Parasol Stars, appearing in only in the final world, the Underworld. They behave similarly to their appearances in Bubble Bobble and Rainbow Islands. In this appearance, they have green eyes and red shoes, as opposed to their usual red eyes and blue shoes.

Maitas appear again in Bubble Bobble Junior, shooting projectiles resembling the planet Saturn instead of the boulders utilized in their previous appearances. This is likely due to the limitations of the Game Boy, since the system's black-and-white display may have made it difficult to properly render a boulder using sprites.

Maitas appear once again in Bubble Symphony, behaving similarly to their previous appearances. A redesigned Super Maita appears as the boss of the Sky Palace, Treasure Desert, and Forest Land levels.

A Maita appears as the second opponent in Player vs. Computer mode in the console version of Bust-A-Move. They also appear inside of the white bubbles in all versions of the game.

A Maita is the eighth opponent in Bust-A-Move 2's story mode, fought in Rastan's Forest. Before the match, it startles Bub by conjuring a boulder directly in front of him, and proceeds to push him away using the boulder.

Maitas appear in Bubble Memories, acting as they have in previous Bubble Bobble games. The sixth boss, Maita P, is a giant Maita dressed like a jester.

Maita appears as an unlockable character in the console version Bust-A-Move 4. He is unlocked by reaching Round 16 in Win Contest mode.

A Maita is a playable character in Super Puzzle Bobble. It can be chosen to join Bub and Chack'n to stop the Time Eaters. Super Puzzle Bobble's promotional flyer states that the Maita appearing in the game is an old friend of Bub's who used to be his enemy. He apparently enjoys being entertained, and came to Pao Pao Island for that reason.

Maitas appear once again in Classic Bubble Bobble, acting identically to their appearance in Bubble Bobble Junior. They have bluish-grey robes in this game. Jam appears once again, acting as the boss of the Grave Area.

A Maita is a playable character and opponent in Bust-A-Move Millennium. In Story Mode, it is fought in the Ghost Tower.

A Maita is a playable character in Puzzle Bobble Pocket. It appears alongside several other enemies from Bubble Bobble.

A Maita is a playable character in Puzzle Bobble DS, along with other enemies from Bubble Bobble.

Maitas appear once again in Bubble Bobble Revolution. The seventh boss is the Maita Mech, a boulder-throwing mecha controlled by three Maitas. In this game, they lack feet and have a small flame in front of them.

Maita is the only playable character from Puzzle Bobble Pocket who does not return in Bust-A-Move Deluxe, appearing only in a cameo.

Maitas appear in Bubble Bobble Double Shot, acting identically to their other appearances in the series. The fourth boss is a Giant Maita, who creates colored boulders that only one of the three dragons can break.

A Maita is the second opponent encountered in the Player vs. Computer mode of Bust-A-Move Plus!.

Maitas appear as enemies in Bubble Bobble Double, using their sprites from the original Bubble Bobble. They once again attack by pushing boulders at Bub, which the player must block by touching the screen of their mobile device.

A Maita is the third boss of Bust-A-Move Universe, appearing in the Desert Zone level. It is guarding a grey Bubble Dragon.

A Maita appears in Bust-A-Move Islands as a playable character than can be obtained from the game's summon feature. The Maita appearing in this game is shown wearing yellow capes, a feature that has not been seen in other appearances.

Maitas appear as targets in the Bubble Bobble-themed Whac-A-Mole-styled arcade game, Bubblun Attack. They use their design from Bust-A-Move Islands in this appearance, and pop out of the back three holes of the machine.

Maita's name is the Japanese spelling of the English word "timer" (タイマー, Taimā?) rendered backwards, due to their role as the timer in Chack'n Pop. 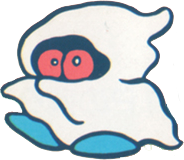 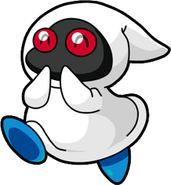 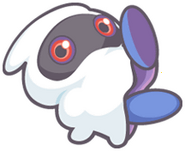 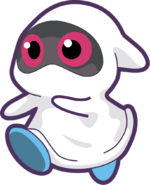 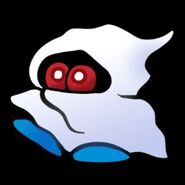 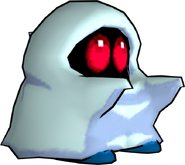