We're Getting Mutants in the MCU - The Loop

Kligan (クリ, Kurigan?) is the second boss in Bubble Memories. He bears a strong resemblance to Birugan, a character appearing in Bust-A-Move 2.

Kligan appears in Bubble Memories as the boss of Round 20. He floats around the stage, firing boulders at the player. As he is hit, crystals fall off of his head one by one. Once all the crystals are gone, he becomes immobilized inside of a bubble, which the player must pop to defeat him.

Kligan appears as a boss in the South Korea-exclusive mobile game Bubble Bobble for Kakao.

Kligan's name comes from the English word "crystal", which is rendered as kurisutaru (クリスタル, kurisutaru?) in Japanese, and the Japanese word gan (, gan?), meaning "rock". 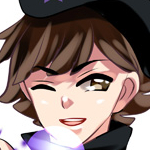 Categories
Community content is available under CC-BY-SA unless otherwise noted.