This article is a stub. You can help Bubble Bobble Wiki by expanding it.

Drunk
Hyper Drunk (はいぱーどらんく, Haipā Doranku?) is the main antagonist and final boss of Bubble Symphony. He is a Drunk that was sealed away inside of a book long before the events of Bubble Symphony, and is responsible for changing the game's four protagonists into Bubble Dragons and trapping them inside of the Storybook World.

Hyper Drunk is a large Drunk that wears a tall green hat with yellow trim resembling a mitre. The hat has an red ornament affixed to the front of it with yellow decorations surrounding it. Hyper Drunk is clad in green robes resembling those traditionally worn by the Drunk race, and wears a red cape decorated with a medalling adorned with the letter H on it. Two ornaments can be seen dangling off of the medallion, both of which are yellow in color. Hyper Drunk also has red boots with a gold strap around them, and wields two spears that he can attach together to form a double-edged spear.

Hyper Drunk possesses magical powers and is able to transform humans into Bubble Dragons, much like Super Drunk. 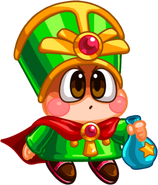