Drunk resembles an ordinary member of his species, bearing a green hood with a yellow rim and carrying a hooked staff. In several games, he is shown wearing a red jewel around his neck.

Puzzle Bobble Pocket and Bust-A-Move Deluxe have Drunk clad in purple robes instead of green, and Bust-A-Move Bash! gives Drunk an opening in his robe, showing him to be wearing red tights underneath.

Drunk is shown to be cunning and mischievous, always causing mischief and attempting to find new ways to wreak havoc. He has dreams of conquering the world, and hatches numerous plots to attempt to do so. In Bubble Bobble 4 Friends, he is shown as having a jealous nature, envying Bub for being given more attention than him.

Drunk is said to be an extremely adept magic user, and is primarily shown using fire magic. By drinking from the bottle he carries with him, he is able to breathe a stream of fire. Drunk is also said to be able to change humans into Bubble Dragons, similar to Super Drunk from the original Bubble Bobble.

Drunk is the main antagonist of Bust-A-Move 2, ordering his minions to steal the stars from the night sky. He appears as the final opponent in the game's Player vs. Computer mode, first encountered while piloting the Mechanical Prototype Bubblen, then being fought on his own after its destruction.

Drunk serves as the main antagonist in Bust-A-Move 3, having summoned numerous characters from other arcade games to Bubble World using his magic, having turned to other worlds due to his ambitions always being crushed by Bub. To disguise himself, he creates the persona of Debblun, utilizing a magical costume that he puts together cheaply due to a lack of funds preventing him from creating a second Mechanical Prototype Bubblun. He serves as the final opponent in the game's Player vs. Computer mode. While not playable in the original arcade release, the console versions of Bust-A-Move 3 add Drunk as an playable character, unlockable by clearing thirty-five consecutive rounds in Win Contest mode.

In Drunk's ending, he is shown returning to his house (which resembles a giant version of his face), sleeping, and then washing his robes and leaving them out to dry in the sun.

Dreg is the final opponent faced in the Player vs. Computer mode of Bust-A-Move 4. He is shown to be manipulating Madame Luna, appearing behind her after her defeat, making him the true mastermind behind the events of the game. Drunk is not playable in the arcade version, but was added as a secret playable character in the console port of the game.

In the English version of the game, Drunk is renamed Dreg, likely to avoid an explicit alcohol reference due to ratings concerns.

Drunk is the last opponent fought in the Vs. Mode Super Puzzle Bobble. He is once again shown to be the true mastermind behind the game, and is in control of the Time Eaters, who are eating the Tree of Time. After Bub defeats him, Drunk is cast outside the dimension, swearing his revenge.

In the English version of the game, Drunk's name is once again changed to Dreg.

Drunk is a playable character in Bust-A-Move Millennium and the final boss of Story Mode. In the game's story, he steals the Gold Bubble, causing chaos throughout Rainbow World, which causes Bub to set out to retrieve the artifact from him. He is fought in his castle, and serves as the final opponent in the game.

Like the previous two games in which he appeared, Drunk is known as Dreg in Bust-A-Move Millennium.

Drunk is a playable character in Puzzle Bobble Pocket. He is clad in a purple robe in this game, and must be unlocked by the player.

Drunk is an unlockable character in Bust-A-Move DS. In the English verison, he is referred to as the Evil Troll. Bust-A-Move DS states that Drunk is responsible for turning Bub and Bob into Bubble Dragons, contradicting other games which state that Super Drunk was responsible.

Many of the other characters in the game are mentioned as having connections to Drunk; Bob's stuffed bear, Willy, was brought to life by his magic, Nin dedicates himself to undoing the effects of Drunk's magic and returning those transformed by him to human form, and Cynthia is mentioned as having left her home in order to hunt him down.

Drunk returns as a playable character in Bust-A-Move Deluxe. He retains his purple robe from Puzzle Bobble Pocket in this appearance.

In both the Japanese and English versions of the games, his name is mistakenly rendered as Dorank.

Drunk is one of two unlockable characters in Bust-A-Move Bash!, alongside Develon. He recieves a redesign in this game, having more elaborate robes with red clothing underneath, a jeweled necklace, and prominent nostrils.

Drunk appears as a playable character in Bust-A-Move Islands. He is referred to as Willy in the english version of the game.

Drunk makes his first appearance in the mainline Bubble Bobble series in Bubble Bobble 4 Friends. In the game's story, the characters appear as toys who come to life in a child's room under the influence of a miraculous light. Jealous of Bub, who is the child's favorite toy, Drunk challenges him to battle, kickstarting the events of the game. He serves as the game's final boss, and appears at the beginning of every boss fight in the game, summoning them to attack the player.

In the game's Hard Mode, Drunk's appearance is altered, he dons black robes with red trim and gains devil horns. His eyes are also red and glowing. This form is referred to as Drunk (Hard Mode) (どらんく（ハードモード）, Doranku (Hādo Mōdo)?) in the Bubble Bobble Compendium book included with the collector's edition of the game.

The English release of Bubble Bobble 4 Friends refers to him as Bonner.

Drunk appears as the main antagonist of the story mode of Puzzle Bobble VR: Vacation Odyssey, kidnapping Peb and Pab, which causes Bub and Bob to set out and rescue them. He only appears in the story cutscene graphics, and does not have a role in actual gameplay.

Dunk appears as a secret character in the console versions Pop'n Pop, unlocked after beating all 100 levels in Checkmate Mode. In his story, he sets out to stop the Super Dark Great Dragon, not wanting the dragon to take over the world before him. His helper is a Skel-Monsta. Drunk is the only character in the game to not have a unique second-player counterpart, as the second-player character for him is just a palette swap of Drunk wearing a pink robe.

Like most of his appearances at the time of the game's release, the English version of Pop'n Pop refers to Drunk as Dreg.

Drunk appears as a playable co-pilot for the Vaus in the Taito crossover title Arkanoid vs. Space Invaders, appearing alongside several other characters from the Bubble Bobble series. His ability is to freeze enemies, blocks, and traps for six seconds while the Vaus is in Attack Mode. 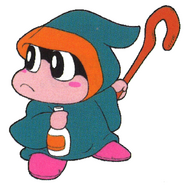 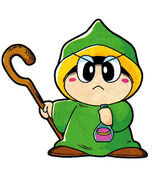 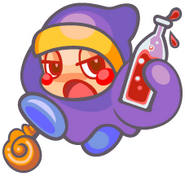 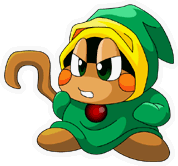 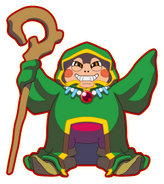 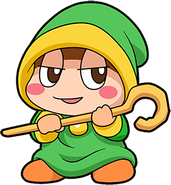 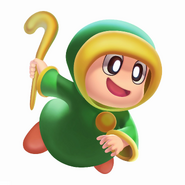