This article is about the recurring enemy. For the individual Drunk that serves as an antagonist in the series, see Drunk (character).

Drunk (どらんく, Doranku?), also known as Willy Whistle or Bonner, is a recurring enemy in the Bubble Bobble series. Drunks are one of the more recognizable monsters in the Bubble Bobble games, as many of the series' antagonists are Drunks, most notably the main antagonist of the original Bubble Bobble, Super Drunk. In the Bust-A-Move series, an individual Drunk is a major recurring antagonist, and if often featured as an unlockable playable character.

Drunks are small humanoid creatures clad in green robes that wield yellow canes resembling a shepherd's crook. The hem of their robes varies in color between games, but is usually either colored yellow or light green. They have rosy cheeks, and wear red boots.

Drunks' main form of attack utilizes the bottles they carry around, which they throw like a boomerang. Drunks are also shown to be adept at using magic, the most notable examples of this being Super Drunk and the Drunk character from the Bust-A-Move games, but this ability has not usually been shown being used by the Drunks encountered as common enemies.

Drunks first appear in Bubble Bobble, and are first encountered on Round 50. They attack by throwing bottles at the player, and move faster and jump higher than most enemies. The game's final boss and main antagonist, Super Drunk, is a giant Drunk that is responsible for kidnapping Bub and Bob's girlfriends, Betty and Patty.

In the updated Sega Master System rerelease of Bubble Bobble, known as Final Bubble Bobble, the ending cutscene takes place in a chapel at the bottom of the Cave of Monsters, where Betty and Patty are shown about to be wed to two blue-clad Drunks, who are stated to be Super Drunk's sons. This ending does not appear in any other version of the game.

Drunks appear as enemies in Rainbow Islands, only appearing in the game's final world, Bubble Island. They throw a wave of six bottles in this game as opposed to just one, as in the original Bubble Bobble. Like all the enemies on Bubble Island, they appear in a perpetually angered state.

Drunks appear once again in Bubble Bobble Part 2, only being encountered in the game's final world, the Castle of Fire. They are larger than their previous appearances, and now must be hit multiple times with a bubble in order to trap them. A robotic version of Super Drunk appears as the game's penultimate boss, and is fought on Round 79.

Drunks appear as enemies in Bubble Bobble Junior, retaining their characteristics from Bubble Bobble Part 2. In the North American manual for the game, they are known as Borracho.

Drunks appear as enemies once again in Bubble Symphony, returning back to their original size and characteristics from Bubble Bobble. Super Drunk appears as the game's first boss, and the main antagonist and final boss, Hyper Drunk, is also a large Drunk.

A Drunk is the seventh opponent encountered in the Vs. Mode of the SNES version of Bust-A-Move. They also appear during regular gameplay in all versions of the game, trapped inside of the green bubbles.

Drunks appear as enemies once again in Bubble Memories, behaving similarly to their appearances in Bubble Bobble and Bubble Symphony. A large, extremely intoxicated Drunk named Taru P is the sixth boss of the game. Two giant Drunks appear on Round 65, carrying the Purple Potion.

Bust-A-Move 2 introduces a Drunk (named "Dreg" in the English versions of later games in the series) who acts as the main antagonist of the game, ordering his minions to steal the stars from the night sky. He acts as the final boss of the game's Vs. Mode, first piloting the Mechanical Prototype Bub, and is then fought on his own after the mech's destruction.

Drunks appear as enemies yet again in Classic Bubble Bobble, behaving similarly to their original appearance. The boss of the Airship Area is a giant Drunk named Melon, and the game's final boss is another giant Drunk known as Darkness Drunk.

Drunks appear as enemies in Bubble Bobble: Old & New, mirroring their appearance in the original Bubble Bobble. They receive a new design in this game to match the game's art style. Their robes are now teal-colored, and they have slightly more humanoid proportions.

Drunks appear again as enemies in Bubble Bobble Revolution, behaving similarly to their appearances in previous titles. The game's final boss is a mech piloted by three Drunks.

Willy Whistles appear once again in Bubble Bobble Double Shot, acting similarly to their appearance in most other games. The game's final boss is a giant mechanical Drunk that the player must fight by controlling an enormous mechanical version of Bub. The stage takes place inside the Bub mech, which Bub, Bob, and Bubu must control by powering a lightning rod, a waterwheel, and a kiln with Special Bubbles.

Drunks appear as enemies in Bubble Bobble Plus!, acting identically to their first appearance. Super Drunk reappears as well, acting as the final boss of Classic Mode, which is a remake of the original Bubble Bobble.

A Drunk is the seventh opponent faced in the Vs. Mode of Bust-A-Move Plus!.

A Drunk acts as the final boss of Bust-A-Move Universe. It is fought in the Prominence level, guarding an orange Bubble Dragon.

Drunk's name comes from the English word "drunk", which is used to refer to someone who regularly drinks alcohol to excess, particularly to the point of intoxication. 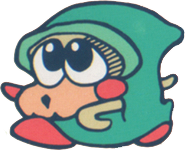 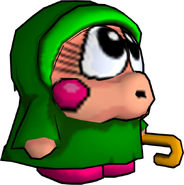