Ryūsei Nakao (Bust-A-Move 4, Super Bust-A-Move)
Develon (デビルン, Debirun?, "Devilun") is an antagonist in the Bubble Bobble series, and a recurring playable character in the Bust-A-Move games. He is Bub's self-appointed rival, and regularly attempts to sabotage his efforts whenever the two meet.

Develon is a black Bubble Dragon with red spines and wings. He has purple limbs, and has sharper claws than most other Bubble Dragons. Due to his appearance, he is believed by many to be a demon.

Develon is extremely competitive and hates to lose, often picking fights with Bub. He aspirations of becoming ruler of the universe, as shown by his ending in Bust-A-Move 4 and role in Space Bust-A-Move, but does not seem to be regarded as truly villainous, as Bub has been shown to be friendly towards him on several occasions. Despite his strong-willed personality, Develon is stated to be nothing more than a lonely coward.

Develon first appears in Bust-A-Move 4 as a playable character. He is fought on the planet Diable. In Develon's Story Mode ending, he uses the power of the Rainbow Bubbles to become ruler of the universe.

Develon returns as a playable character in Super Puzzle Bobble. In his story mode, he challenges Bub to a fight. Bub was about to set out with Chack'n to defeat the Time Eaters, so Develon decides to tag along with him.

Develon is a playable character in Bust-A-Move Millennium. In Story Mode, he is fought on Mt. Spiral.

Develon is a playable character in Bust-A-Move DS. In the English version of the game, he is referred to as Dev.

Develon appears once again as a playable character in Bust-A-Move Bash!. He is one of two unlockable characters, alongside Drunk. He and Drunk share an ending.

Develon is the final boss and main antagonist of Space Bust-A-Move. He is attempting to gather the Cosmo Bubbles to take over the universe. He is also Snown's captor. Develon is the boss of two levels; Rainbow Land and Cosmo Castle. He summons bubbles around him to defend himself, and can temporarily disable the Bubble Launcher. After being defeated, Develon attemps to finish off Bub and Bob, stating that he intends to remove everyone's hopes and dreams with the Cosmo Bubbles, but is stopped by Snown at the last second. The English verison of the game refers to him as Devilin.

The final boss of Bubble Bobble Double is a giant mechanical version of Develon called Mecha Develon, who throws Bub and Bob into a mysterious dimension in an attempt to take over Rainbow Star. The English version of the game spells his name as both Mecha Devilin and Mecha Devilun. 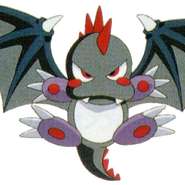 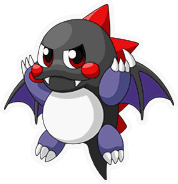