Motoko Kumai (Pop'n Pop)
Bubby (バビー, Babī?) is the human form of Bub and the main character of the Rainbow Islands series. He is a young boy who is able to use Rainbow Magic, and the twin brother of Bobby. Bubby has appeared as the main playable character in almost every Rainbow Islands game, and has appeared in numerous Bubble Bobble games as well.

Bubby is a brown-haired human boy who is typically seen wearing a green shirt, reflecting his Bubble Dragon counterpart's color scheme. In most of his appearances, he is seen with blue overalls and brown shoes. His hair is generally shown to be parted to the side.

In several games, including Parasol Stars, Rainbow Islands Revolution, and Bubble Bobble Plus!, Bubby is seen with green overalls instead of blue ones.

Bust-A-Move Islands features a very different design for Bubby, more closely reflecting his dragon form. In the game, Bubby has messy green hair, and wears a white dress shirt with suspenders. He has pink cuffs and shoes, resembling the coloration of his dragon form's arms, as well as a pair of goggles perched on his forehead.

Bubble Bobble for Kakao features another new design for Bubby, though he appears slightly closer to his classic incarnations, sporting brown hair once again. In the game, Bubby is seen wearing a suit modeled after Bub, with goggles resting atop the suit, reflecting Bub's attire in the game. He uses an orange and blue bubble gun to blow bubbles.

Bubby is generally portrayed as being rowdy and cheerful, always looking for adventure. He has a strong sense of justice, and is always willing to help people in need. He shares a close relationship with his brother, Bobby, and the two have gone on many adventures together.

Bubby's main ability is using Rainbow Magic, which allows him to create rainbows that can be used as platforms. Bubby is able to use these rainbows in an ability called the Rainbow Attack (レインボーアタック, Reinbō Atakku?), which involves him generating a rainbow while next to an enemy, which will defeat them if they are hit by the rainbow as it generates. Bubby also wields the Magic Parasol in Parasol Stars, which allows him to pick up foes and throw them. In Bubble Symphony, he can use a bubble flute to blow bubbles.

Bubby first appears in the Good and True endings of Bubble Bobble, in which Bub and Bob are turned back into their human forms after rescuing after rescuing Betty and Patty. In the game's story, Betty and Patty are kidnapped by Super Drunk, causing Bub and Bob to set out and rescue the two, but they encounter Super Drunk in the Wizard's Forest are transformed into Bubble Dragons by him.

Bubby appears as the main character of Rainbow Islands. In the game's story, he and Bobby come across a sailor who tells them about an archipelago known as the Rainbow Islands located in the south, and that on the islands lies a great treasure known as the Diamond Rod that will grant whoever finds it any wish they desire. Excited, Bubby and Bobby travel south to the Rainbow Islands, but the inhabitants of the islands are all missing, and the islands have been overrun by monsters. The duo discover that the Boss of Dark Shadow, who was behind the events of Bubble Bobble, is responsible for kidnapping the villagers and transforming them into Bubble Dragons. Bub and Bob set out to rescue the trapped villagers and defeat the Boss of Dark Shadow, hoping to find the Diamond Rod along the way if they can.

Bubby appears in the ending of Bubble Bobble for the Game Boy, with Bub transforming back into human form after returning the Moon Water to the spring in Nemonemo Forest.

Bubby returns in Parasol Stars, wielding the Magic Parasol, a gift from the villagers of the Rainbow Islands as a reward for saving them. He must save the planets around Rainbow Star from monsters and defeat Chaostikhan. Using his parasol, Bubby can grab and throw enemies, and also collect droplets to turn them into Special Bubbles.

In the original Japanese story of Bubble Bobble Part 2, the main character is actually Cubby (カビー, Kabī?), a descendant of Bubby from one hundred years after the events of Rainbow Islands.

In Bubble Symphony, Bub can be transformed into Bubby by collecting the three Rod Bubbles. For the bubbles to appear, the player must allow "Hurry Up!" to appear by not completing the level in a certain amount of time. Bubby blows bubbles through a bubble flute in this game.

Bubby makes a minor cameo appearance in the upgraded version of Bust-A-Move 2 known as Bust-A-Move 2: Arcade Edition, known as Puzzle Bobble 2X in Japan. He is seen in several of the holiday-themed Attract Modes for the game, and is shown dreaming about his various adventures as Bub.

Bubby appears in the intro and true ending of Bubble Memories. He and his brother are transformed into Bubble Dragons by the Super Dark Great Dragon, the revived form of the Boss of Shadow, and must ascend the Rainbow Tower and complete the Rainbow Potion in order to change themselves and the villagers of the Rainbow Islands back to their human forms. Bub and Bob transform into Bubby and Bobby, and float down from the top of the Tower of Darkness with parasols, which is a reference to Parasol Stars.

Bub is a playable character in Rainbow Islands Revolution. He appears inside of a bubble, and the player must draw rainbows around him to defeat enemies. He has the most well-rounded stats of all of the characters.

Bubby appears in the opening and ending movies in Bubble Bobble Evolution, being cast into the Maniac Pleasure Palace alongside his brother. In this game, instead of being transformed into Bubble Dragons, the two are instead stuck inside suits resembling their Bubble Dragon forms, but despite this, the character is still referred to as "Bub" in-game.

Bubby appears again in Rainbow Islands Evolution. He uses a hurdy gurdy to create rainbows. In the game's story, Bubby and Bobby set out to stop the evil recording company Million Records, whose noise pollution is negatively effecting the wildlife and plant life of the Rainbow Islands.

Bubby appears in the Classic Mode of Bubble Bobble Plus!, appearing in the same role as his appearance in Bubble Bobble.

In Rainbow Islands: Towering Adventure!, Bubby and Bobby climb up the Rainbow Tower in order to find Holly's Comet. They must run from the evil Dr. Crescent, who is trying to defeat them using his giant mechs.

Bubby appears as playable character in Pop'n Pop alongside Bobby, as well as the Monsta that serves as their helper character.

In the game's story mode, the two are playing in a park near their house, but decide to head home after it begins to get late. On the way home, the two encounter a balloon floating by, Bubby tries to grab the balloon, but it bursts, revealing a message from Princess Lena. She explains that her kingdom, Pop'n World, is being invaded by an army of monsters led by the Super Dark Great Dragon, who had been revived after his defeat in Bubble Memories. The two decide to set out to Pop'n World, resolving to stop the Super Dark Great Dragon once and for all.

Eventually, the duo manage to confront and defeat the Super Dark Great Dragon, rescuing Princess Lena. The Princess thanks them for their help, and sends them back home atop a magical cloud, with the two planning to rest up before their next adventure.

Bubby and Bobby's story cutscenes are identical to those of their Bubble Dragon forms, with the only differences being the names of the characters and the form they take in the scenes.

Bubby appears as a playable co-pilot for the Vaus in the Taito crossover title Arkanoid vs. Space Invaders. His special ability is to deflect bullets and causing the ball to travel at 150% speed for six seconds. 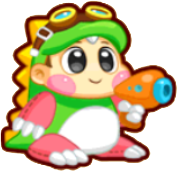 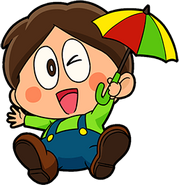