Bubble Memories (バブルメモリーズ Baburu Memorīzu?) is a video game by Taito released to arcades in February 1996. It is the sequel to Bubble Symphony and is the fifth Bubble Bobble game (although it is listed as being the third). Unlike Bubble Symphony, this game stars only two dragons, Bub and Bob, like the original Bubble Bobble. It was released in 2007 for PlayStation 2 in Japan only as part of the Taito Memories II Volume 1 compilation.

One day the twins, Bubby and Bobby, intermarried with Bub and Bob, playing together to the tower where they live, are transformed into dragons bubble shooter by the evil Super Dark Great Dragon that takes possession of the tower. The twins must climb the 80 floors of the tower to take seven colorful potions, free her from his clutches and regain their human forms.

Bub and Bob are once again transformed into bubble dragons and have to climb up the Rainbow Tower to fight the Super Dark Great Dragon, while collecting potions to turn back into human form.

Bubble Memories does very little to change the gameplay of the series, except for introducing giant enemies on some levels, different bosses, and a way to blow giant bubbles after charging up (especially for killing the giant enemies). Giant bubbles can be blown by charging up the character,[5] the bubble button is held until the character's horns begin flashing and then releasing the button. There are a total of 80 levels, while the last 10 levels can only be accessed by collecting 7 potions.

As previously mentioned, Bub and bob can shoot giant bubbles by holding the bubble button. Large bubbles only have green and blue palates.

There are two more enemies that have no name, Sheep-like ghost, and Flying, Maita-like, Orange-Robed enemy that can shoot waves in three ways.

Unfortunately, Bubby & Bobby have been unable to return to human form...

As the 7 potions didn't become complete, they became "MONSTERS". 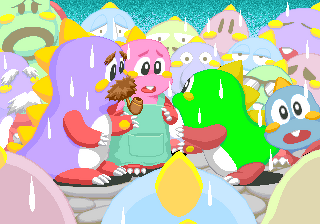 Has everyone been turned into dragons?

You have done very well. You have shown your mettle well. But perhaps you would do well to remember that it was with my power that the villagers of Rainbow Island have been transformed into dragons. If you have the courage, I will grant you the opportunity to fight a duel in the Tower of Darkness. Just remember that I will take the 7 Magic Potions from you if you lose.

The Key of Super Mode[]

Write 8 big words on a paper. This is a key of Super Mode. Hints of this words...

Input this words as title, as... 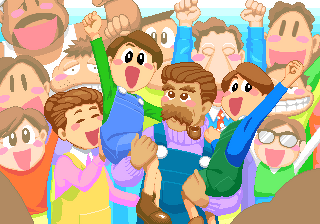 We're back to our old selves again!