Bubble Bobble Double Shot is a game in the Bubble Bobble series for the Nintendo DS. It was released in Europe on March 23, 2007 and Australia on April 5, 2007 by Rising Star Games. It was later released by Ignition Entertainment in North America on February 26, 2008. This game was never released in Japan.

The story involves Bub and Bob visiting their cousin Bubu (an orange/red bubble dragon) and their grandfather. In the attic of their house, they find a treasure map. They decide to explore the island that Bubu resides on to search for treasure.

The gameplay uses similar mechanics to the original Bubble Bobble game - the standard way to kill enemies is as usual: blowing a bubble to trap them and then popping the bubble before they can escape. Each stage is laid out over the Nintendo DS's dual screens, so there is no scrolling. The game also supports co-operative multiplayer for multiple DS cards, for up to three players.

One of the newest features of Double Shot is the color scheme. Players can switch between Bub, Bob and Bubu on the fly, with each character shooting a different color bubble. As usual, Bub shoots green bubbles, Bob shoots blue bubbles and Bubu shoots red bubbles. However, a gameplay change is that some enemies can only be attacked by a bubble of a specific color, while others require being trapped by two bubbles of different colors. Every 10 levels, there is a boss stage, and there are 100 stages in all. If the player loses all lives, a touch screen minigame must be successfully completed in order to continue.

One day, Bub and Bob went to see their cousin, Bubu.

In their grandfather's room, the 3 of them found a mysterious treasure map.

Following this map, the 3 of them started their long journey to find the treasure. 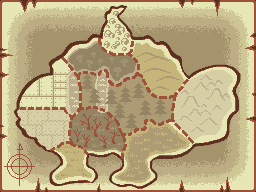 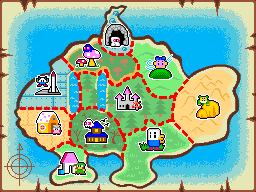 Good job, kiddos! Actually, this treasure map is fake. This journey was my present to you. During this journey, you found something even more valuable than a treasure. You found courage. And for your perseverance, please accept this "Heart of Courage". Never forget that Courage will always be with you. 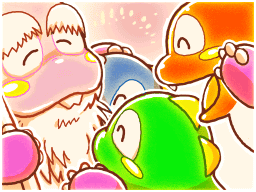