Bob, known as Bobblun (ボブルン, Boburun?) in Japan, is the secondary protagonist of the Bubble Bobble series. He is a blue Bubble Dragon, and the twin brother of Bub. Bob first appeared as the second-player character in the original Bubble Bobble, and has appeared in most of the subsequent games in the series. He lives on Rainbow Island with his parents and brother. His human form is named Bobby.

Bob is a small blue Bubble Dragon with yellow spines (though they are occasionally portrayed as light blue in color). He has reddish-pink arms and feet, as well as a white stomach area. Like most Bubble Dragons, Bob has a single visible tooth centered on the upper part of his mouth.

Bob is portrayed as being quiet and shy, contrasting with his brother's free-spirited and rambunctious personality. His favorite pastime is reading, and can often be found with his nose in a book. Bob has a close relationship with Bub, and the two have gone on many adventures together.

Bob's catchphrase is "Pinpuruh!" (「ぴんぷるー！」, Pinpurū?), a nonsense word that serves as a greeting or exclamation of excitement.

Bob is able to to shoot bubbles from his mouth, an ability utilized by most Bubble Dragons. If the bubbles make contact with an opponent, they get trapped inside, allowing Bob to pop the bubble with his spines in order to defeat them. Along with utilizing the bubbles to attack foes, Bob is also able to jump on them in order to reach new heights.

Bob's abilities and stats are usually identical to Bub's as he usually serves as the second player character, however, in Bubble Symphony, he is able to move much faster than the rest of the playable cast.

In addition to his normal bubbles, several games have allowed Bob to charge up his bubbles, the effect of which varies from game to game. The first game to feature this ability was Bubble Bobble Part 2, in the form of the Super Bubble (スーパーバブル, Sūpā Baburu?) technique, which allows Bob to fire multiple bubbles at once. Additionally, if the player continues to hold down the button and continues to charge, Bob will inflate like a balloon, allowing him to slowly float upwards, allowing him to access previously unreachable areas.

A similar mechanic is implemented in Bubble Symphony, with each of the four playable characters having a different formation of bubbles that they can fire. Bob is able to shoot three bubbles in a spread pattern, trapping any enemies within his range. Unlike Bubble Bobble Part 2, the ability to float is not present in the game.

Bob retains the ability to charge his bubbles in Bubble Memories, albeit with a new twist. By charging up his bubbles, Bob can unleash a Giant Bubble (巨大バブル, Kyodai Baburu?) which can trap multiple enemies at once. This ability returns in Bubble Bobble Revolution in the form of the Charge Bubble (チャージバブル, Chāji Baburu?), which in addition to trapping multiple enemies, can bounce off of walls. After bouncing off of a wall, if the Charge Bubble collides with Bob, he will enter it and perform the Rolling Bubble (ローリングバブル, Rōringu Baburu?) technique, which allows him to charge into enemies and defeat them.

Bub first appears in Bubble Bobble as the second-player character. Bob, along with his brother, Bub, were turned into Bubble Dragons by Super Drunk after attempting to rescue their girlfriends, Patty and Betty, who were kidnapped after wandering into the Magical Forest. The duo sets out to travel through the 100 levels of the Cave of Monsters and defeat the girls' captor.

Upon reaching the bottom of the cave and defeating Super Drunk, Bob and Bub manage to rescue their girlfriends, as well as their parents, who were under the control of an unknown figure who had been giving orders to Super Drunk.

Bob returns in Bubble Bobble Part 2, once again appearing as the player two character. After his adventures in human form in the Rainbow Islands series, Bob returns to his Bubble Dragon form, setting out to rescue the twins' friend Judy from the Skull Brothers. Although Bob is once again the Player 2 character, he does not have to be controlled to unlock the true ending like in the original Bubble Bobble, as the game does not feature simultaneous multiplayer.

In the original Japanese story (which was also used on the back of the game's box in North America), the characters in Bubble Bobble Part 2 are actually named Cubby (カビー, Kabī?) and Rubby (ルビー, Rubī?), and are the descendants of Bub and Bob. This is ignored in the North American manual, and most supplementary material for the game presents the two as simply being the same Bub and Bob as the original Bubble Bobble.

Bob is one of the playable characters in Bubble Symphony, possessing the fastest movement speed. Bob is banished to the Storybook World by Hyper Drunk alongside Bub, Peb, and Pab. If Bob collects three bubbles, each with the letters 'R', 'O', and 'D' on them, can transform into Bobby, attacking instead by blowing bubbles through a bubble pipe. After defeating Hyper Drunk, the four become the kings and queens of the Storybook World, and return back home.

Bubble Symphony's intro states that the four characters in the game are the children of Bub and Bob from the original Bubble Bobble, but several sources later contradict this, namely the game's promotional flyer, as well as later games featuring Peb and Pab that simply refer to them as Bub and Bob's girlfriends.

Bob is playable in the Vs. Mode of Bust-A-Move as the second player character. He also appears in the ending of Puzzle Mode, after Bub defeats Super Drunk.

Bob appears as the second player character in the Vs. Mode of Bust-A-Move 2.

In Bubble Memories, Bob is the Player 2 character once again. He now has the ability charge up this bubbles to create a giant bubble in order to capture multiple enemies at once. In the beginning of the game, Bub and Bob set out to save the inhabitants of the Rainbow Islands, who have been transformed into Bubble Dragons by the Super Dark Great Dragon. Bub and Bob must climb the Rainbow Tower and defeat the Super Dark Great Dragon, as well as obtain the seven Magic Potions to return everyone to human form. After defeating the Dragon for the first time, he raises the Tower of Darkness out of the sea, which the duo must ascend to defeat him once and for all. After Bub and Bob square off against the Dragon's true form, they use the combined Magic Potions to change everyone back to human form.

Bob is the first opponent fought in Bust-A-Move 4. He is also playable in Vs. Mode as a palette swap of Bub.

Bob is a playable character in Super Puzzle Bobble. He travels with Bub and Chack'n to stop the Time Eaters from destroying the Tree of Time.

In Classic Bubble Bobble, Bob is not playable. He has fallen ill and Bub must retrieve the Moon Water from Darkness Drunk to cure him, a storyline originally used in the Game Boy version of Bubble Bobble.

Bob is an unlockable playable character and opponent in Bust-A-Move Millennium. He is fought in the Dark Forest in Story Mode.

Bob is the P2 helper character in Super Bust-A-Move.

Bob appears once again in Bubble Bobble: Old & New, playing an identical role as in the original Bubble Bobble. His design in the "New" mode is significantly taller and slimmer than he is usually depicted.

Bob is a playable character in Puzzle Bobble Pocket.

Bob is a playable character in Puzzle Bobble DS.

Bob is one of two playable characters available at the start of Bubble Bobble Revolution. Bob is no longer the fastest character, but can jump much higher than the other three.

Bob is a playable character in Bust-A-Move Deluxe. he is one of five returning characters from Puzzle Bobble Pocket.

Bob appears as one of the two playable characters in Bubble Bobble Evolution alongside Bub. In this game, he is not turned from a human into a Bubble Dragon, but simply cursed to remain trapped inside of a suit resembling his Bubble Dragon form. Despite this, he is still referred to as "Bob" while in the suit in-game. Instead of blowing bubbles via his natural abilities, Bob now uses a bubble trumpet to attack instead.

Bubble Bobble Evolution reimagines Bubby and Bobby as twin boys living in London, England during the 18th century. As they were playing by the River Thames, the two grew tired and planned to head home, but are suddenly kidnapped by a mysterious force and trapped inside Bubble Dragon suits. They are kidnapped and lifted high into the sky, becoming trapped in the Maniac Pleasure Palace. Eventually the duo manage to make their way to the top of the Pleasure Palace's two towers, conquering the monsters that lie within and reunite, and are subsequently congratulated by the towers' owner before being thrown back out to the outside world, returning to their original forms.

Bob appears alongside Bub and newcomer Bubu in Bubble Bobble Double Shot, setting out to find the treasure from a map the three found in their grandfather's attic. He is the only character who can trap enemies with a blue star around them in a bubble.

Bob is a playable character in Bust-A-Move Bash!. He is much taller and slimmer than in this game than he is usually depicted, reminiscent of his design from Bubble Bobble: Old & New.

In Space Bust-A-Move, Bob is once again a playable character. He and Bub find a meteor that fell onto Rainbow Star, which displays a message from Snown. The duo travel the universe collecting Cosmo Bubbles in order to free Snown from Develon.

Bob is the second player character once again in Bubble Bobble Plus! in both of the game’s modes, as well as in the game’s two DLC campaigns.

Bob the second player character in Bust-A-Move Plus!.

Bob appears in Bubble Bobble Double as a non-playable character. He is sent into a strange dimension along with Bub by Mecha Develon, and gets separated from his brother. After Bub destroys Mecha Develon, Bob appears and reveals he has found the exit.

Bob appears alongside Bub in New Bust-A-Move, setting out to obtain the Magic Rainbow Wands in order to restore himself to human form. Bob wears goggles and a satchel in this game.

Bob is the first Bubble Dragon that Bub rescues in Bust-A-Move Universe, being held captive by a Zen-chan in the game’s Motherland level.

Bob returns in Bust-A-Move Islands, having the same role and design has he did in New Bust-A-Move.

Bob appears as the second player character in Bubble Bobble 4 Friends. In-game, Bob appears in his more traditional appearance by default, but can don his goggles and satchel from previous mobile titles as part of the game's skill upgrade system.

Bob appears as one of the main characters in Puzzle Bobble VR: Vacation Odyssey, alongside Bub. In the game's story mode, they set out to defeat Drunk, who has kidnapped Peb and Pab.

Bob appears as a palette swap for Bub in the console version of Pop'n Pop. Like Bub, his helper is a Monsta.

Bob appears as a copilot for the Vaus. His special ability is to cause the Vaus to fire 1 missile per second for 5 seconds. 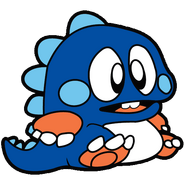 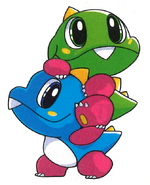 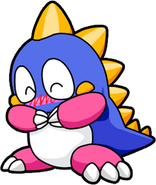 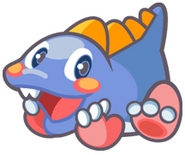 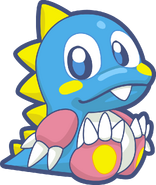 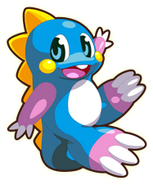 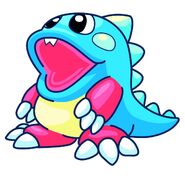 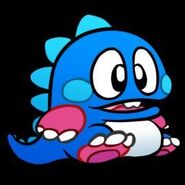 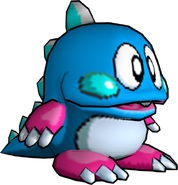 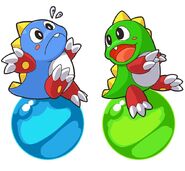 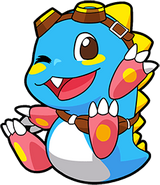 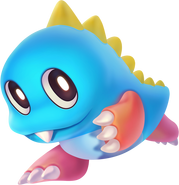 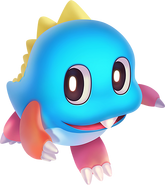 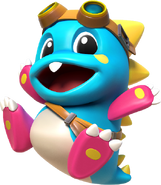